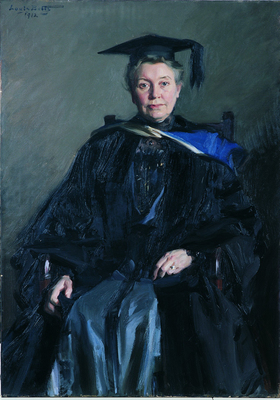 Ellen C. Sabin became president of Milwaukee-Downer College when it was created by a merger of Downer College of Fox Lake, Wisconsin and Milwaukee College in 1895.

As president of Milwaukee-Downer College she increased enrollment from 40 to 400; elicited significant financial support for the college; strengthened the liberal arts curriculum to include biological, physical and social sciences; and started new programs in home economics, occupational therapy and nursing. Known as a tireless educational reformer and strong proponent of higher education for women, Sabin believed that young women received the best education in a women's college setting.

After her retirement in 1921, she lived in Madison, where she was active in numerous educational and women's organizations. She died in 1949 at age 98.

Louis Betts (1873-1961) studied at the Pennsylvania Academy of Fine Arts and with William M. Chase, one of America's great nineteenth century portrait painters. The work of Franz Hals (Holland) and Diego Velasquez (Spain) also influenced Betts. During his long career, Betts won many prizes and exhibited his work throughout the country. He helped found the artists colony in Park Ridge, Illinois. His works hang at the Art Institute of Chicago, the Corcoran Gallery of Art in Washington, D.C., the U.S. Capitol, and in many other public and private collections.

A group of former students and friends of Ellen Sabin, cajoled her into sitting for a portrait. According to Lorraine Watts, M-D '15, this group raised $2,000 and selected Louis Betts because he was "the best portrait painter of his day." Betts' wife, who traveled with him, initially insulted Sabin by suggesting that she apply some make-up. The story goes that Sabin's only remark about her completed portrait was, "I look exactly like an apple dumpling." In reality, the portrait is exquisite, capturing Sabin's strength and intelligence, while at the same time portraying her as an attractive and intriguing woman.

Read "President Sabin sits for her portrait," by Lorraine Watts, M-D '15, from the Milwaukee Journal, November 12, 1963.