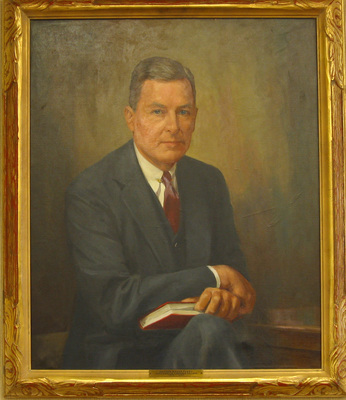 Lawrence's tenth president, Nathan Marsh Pusey, was hired because of his excellent teaching credentials and his vision to make Lawrence a much better institution than her peers. Born in 1907 in Council Bluffs, Iowa, Pusey earned A.B., M.A., and Ph.D. degrees from Harvard University. He served as sophomore tutor at Lawrence from 1935 to 1938 under the administration of Henry Wriston. After six years of successful teaching of ancient history at Scripps College and Wesleyan University, Pusey returned to Lawrence as president.

Pusey's tenure included the building of the Memorial Student Union and the Worcester Art Center (predecessor to the Wriston Art Center). His most lasting legacy, however, was his creation of Freshman Studies, the course that still introduces students to the concept of liberal learning today. While the list of works studied in the course has become more inclusive, there have been only a few modifications in course structure since Pusey introduced it in the fall of 1945.

In 1953, Harvard University enticed Pusey away from Lawrence to become their twenty-fourth president. He died on November 14, 2001 at age 94.

R.K. Fletcher (Richmond K.) was born in Lowell, Massachusetts in 1885. Known for his painting of coastal scenes, Fletcher also excelled in portraiture, music composition, and architectural design. A graduate of Harvard, Fletcher's artwork is in the collection of the Whistler House Museum of Art in Lowell, Massachusetts. Two portraits of New Hampshire governors painted by Fletcher hang in that statehouse. Fletcher died in 1965.

Bachrach Portrait Photographers of Newton, Massachusetts photographed Henry Wriston shortly after his assumption of the presidency of Brown University. Bachrach then contracted with R.K. Fletcher to paint a portrait of Wriston from this photographic likeness. In April 1941, Bachrach sent the portrait to then President Thomas Barrows at Lawrence, with the suggestion that Lawrence University purchase the Wriston portrait. After months of haggling over the cost (Fletcher would not budge from the $550 original pricetag), various trustees, alumni, and friends donated enough money to purchase the painting.

While records are incomplete, it appears that the Board of Trustees chose Fletcher to paint Pusey's portrait because they were pleased with the Wriston likeness. George Banta, Jr., a member of the Board who was instrumental in hiring Pusey, donated the $1,100 necessary to buy the portrait in 1953.