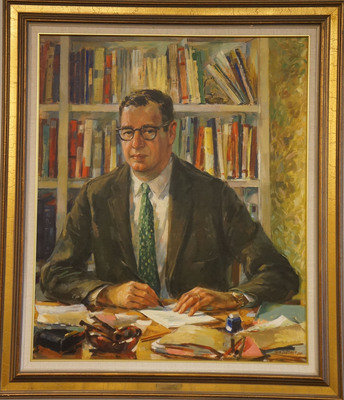 Douglas Maitland Knight was thirty-two years old when he became president of Lawrence College, the youngest president in Lawrence's history. Knight received three degrees from Yale: his A.B. in 1942, the M.A. in 1944, and the Ph.D. in 1946. He taught English at Yale for several years before becoming president of Lawrence.

During Knight's nine-year tenure, the geographic diversity of the student body increased, the curriculum underwent extensive study, resulting in the addition of Sophomore Studies, Junior Departmental Readings, and a focus on the sciences and non-European studies, and several buildings were completed or planned, including Colman Hall, Plantz Hall, the Music-Drama Center, and the Samuel Appleton addition to the Carnegie Library. Knight left Lawrence to become president of Duke University in 1963. He is the author of several books, many of which are available in the library (see below). Additional information about Dr. Knight may be found in the Lawrence University archives.

Thomas Dietrich, Artist-in-Residence at Lawrence University from 1944 to 1974, gained fame in Wisconsin and beyond for his watercolors of Fox Valley and Door County landscapes, bridges, factories, and people. More than 1,000 of his paintings are in public and private collections throughout the United States.

An Appleton native, Dietrich attended the Experimental College of the University of Wisconsin, with further study at the Cincinnati Art Academy and the Minneapolis School of Art. During his thirty-years on the faculty at the University he taught hundreds of art students, exhibited his works throughout the U.S., and won numerous regional and national art prizes.

An artist who worked in a variety of media, he designed the stained glass windows at Memorial Presbyterian Church on College Avenue and created windows for at least seventy other churches throughout the U.S. Nonetheless, his major legacy consists of a large body of watercolor and oil paintings that capture the spirit of the Fox Valley. The University has twenty-three works by Dietrich in its collection. We are fortunate to exhibit several in this gallery.