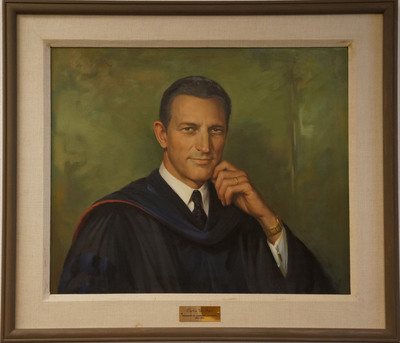 Curtis W. Tarr, Lawrence's twelfth president, served the university for only six years. During that time, he negotiated the agreement and shepherded the merger of Lawrence with Milwaukee-Downer College, a move that increased the university's endowment from $7,000,000 to $20,000,000. Tarr came to Lawrence from Stanford University where he had served as a lecturer and assistant dean of humanities and science. He holds an M.B.A. from Harvard University and a Ph.D. in American history from Stanford and while at Lawrence conducted many history tutorials with individual students. Tarr served in the Army during World War II.

Toward the end of his term of office, the university began to experience tensions associated with the Vietnam War and desire of students to be more involved in campus decision-making. As a result, the Lawrence University Community Council was created in 1968. President Tarr left Lawrence in 1969 to become an Assistant Secretary of the Air Force. Shortly thereafter he became the Director of the Selective Service System at a time when the draft was highly controversial.

Lester Bentley was a well-known Wisconsin painter who specialized in portraits and murals. He was born in Two Rivers, Wisconsin, studied with Carl Buehr, Louis Ritman, and Valentine Vedauretta, and taught art for a short time during the 1930s. During his career, he maintained a studio in Two Rivers and in Greenwich, Connecticut. His work hangs in several churches in Two Rivers, in the Neville Public Museum in Green Bay, and at the Elvehjem Art Museum in Madison. Ruth Shattuck, a member of the Board of Trustees, suggested that Mr. Bentley be commissioned to paint President Tarr's portrait. Because of Tarr's heavy travel schedule, he did not meet with Mr. Bentley until May of 1971 for a first sitting. The second sitting, where Mr. Bentley put the finishing touches on the portrait, occurred in December of the same year.