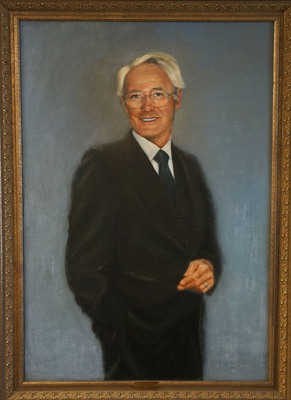 The ten years, 1969-1979, during which Thomas Stevenson Smith served as Lawrence's thirteenth president were marked by unrest and controversy in the nation as well as on campus. Born in 1921 in Hubbard, Ohio, Smith received his A.B. from Kenyon College and Ph.D. from Ohio State University. Prior to assuming the presidency of Lawrence, he served as provost of Ohio University at Athens, vice-president of academic affairs and professor of physics. He served as an examiner for the North Central Association, on the selection committee for the Rhodes Scholarships, on the Wisconsin State Board of Ethics, and on the board of directors of the National Association of Independent Colleges and Universities.

President Smith met challenges that were facing other liberal arts colleges at this time -- budget deficits, campus protests, and faculty resignations. He embarked on strategic and long-range planning for the college, opened the Seeley G. Mudd Library, renovated two dormitories, and planned for the renovation of Main Hall. Upon his retirement in 1979, Smith said that it was time for a change for him and Lawrence, but reiterated his faith in the quality of Lawrence University and its future.

Keith David Hoover, an art major, graduated from Lawrence University in 1979. As a student, he initiated a meeting with President Smith and made arrangements to paint the president's official retirement portrait.

He subsequently exhibited the portrait at his Senior Art Exhibition. During the years since his graduation, Mr. Hoover has continued to use his artistic talents in the workplace. He was employed for many years in New York City for George Lott, Agent, as a freelance illustrator for companies such as Brooks Brothers, Grey Advertising Agency, Lord & Taylor, Fairfield Stores and Paragon. He also served as art director for Ralph Lauren. He is currently employed with the Target Corporation in the Minneapolis area.

During his years at Lawrence, he also created a series of Lawrentian comic strips titled "Dealing" under the byline of Hooves.