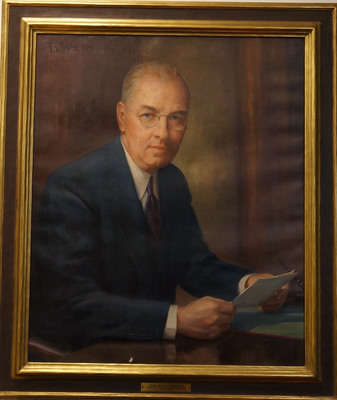 When Henry Wriston arrived in Appleton as Lawrence's eighth president, he was just thirty-six years old. The son of a Methodist minister and a schoolteacher, Wriston had been born in Laramie, Wyoming in 1889. He received his B.A. and M.A. from Wesleyan University in Connecticut and his Ph.D. from Harvard University in political science.

Wriston spent his twelve years as president raising academic standards, revising the curriculum, expanding the library, and improving the quality of the faculty. As the first Lawrence president who was not a Methodist minister, he also weakened the church's control by removing the Board of Visitors from the University's Board of Trustees.

Wriston tirelessly spoke and wrote about the importance of the liberal arts in developing student intellect. His book, The Nature of a Liberal College, published in 1937, is given to every Lawrence University graduate.

Wriston left Lawrence in 1937 to become the President of Brown University. He retired from that post in 1955. Until his death in 1978, he was active on numerous commissions and committees that dealt with educational and governmental issues.

R.K. Fletcher (Richmond K.) was born in Lowell, Massachusetts in 1885. Known for his painting of coastal scenes, Fletcher also excelled in portraiture, music composition, and architectural design. A graduate of Harvard, Fletcher's artwork is in the collection of the Whistler House Museum of Art in Lowell, Massachusetts. Two portraits of New Hampshire governors painted by Fletcher hang in that statehouse. Fletcher died in 1965.

Bachrach Portrait Photographers of Newton, Massachusetts photographed Henry Wriston shortly after his assumption of the presidency of Brown University. Bachrach then contracted with R.K. Fletcher to paint a portrait of Wriston from this photographic likeness. In April 1941, Bachrach sent the portrait to then President Thomas Barrows at Lawrence, with the suggestion that Lawrence University purchase the Wriston portrait. After months of haggling over the cost (Fletcher would not budge from the $550 original pricetag), various trustees, alumni, and friends donated enough money to purchase the painting.

While records are incomplete, it appears that the Board of Trustees chose Fletcher to paint Pusey's portrait because they were pleased with the Wriston likeness. George Banta, Jr., a member of the Board who was instrumental in hiring Pusey, donated the $1,100 necessary to buy the portrait in 1953.