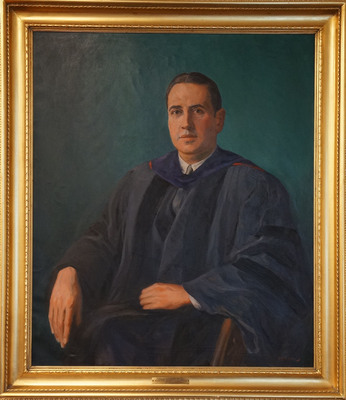 Barrows was dean of Lawrence College for two years before becoming its ninth president. He was born in 1900 in San Diego. The son of a college president, Barrows received his A.B. from the University of California, the M.A. from Columbia University, and the LL.D. from Ripon College.

During Barrows' seven years as president of Lawrence, the fraternity quadrangle was completed, pre-war enrollment increased by 10%, and relations improved with the surrounding community. Barrows also introduced a program of honors in independent study, still an important feature of Lawrence's curriculum. Thomas Barrows resigned because of ill health in 1943 and died in 1962.

F. R. Harper was born in 1876 in Rock Island, Illinois. He travelled and studied in New York and Europe before returning to Chicago in 1908. Harper studied art at the Art Institute of Chicago with William Chase and Robert Henri and his work was exhibited frequently at the Art Institute and the Metropolitan Museum in New York. He died in 1948.